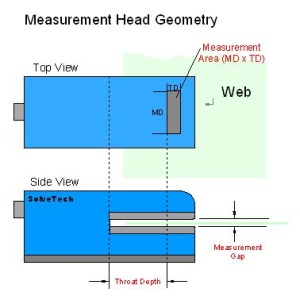 Thin film has a variety of applications. The most familiar is the household mirror, which typically has a thin film coating on the back of a sheet of glass to create the reflective properties of a mirror. Thin film is also used on optical coating, two-way mirrors, computer memory chips, batteries, dye-sensitized solar cells and pharmaceuticals.

Depending on its use, thin film can be made out of a variety of materials. The process and tool for measuring thin film thickness vary per material type.

Thin film can be single layer or multi-layer. Measurement techniques for thin film thickness are typically optical, using a spectrometer and a reflectance probe with light source. Thickness is gauged by detecting the fringe pattern in the film’s reflectance. Several measurement models are taken from the thin film for comprehensive analysis.

Investing in a thin film gauging system can add value to your manufacturing process. When used at production set up, film gauging can ensure that you do not waste materials. When gauging is performed mid-process, it can be a useful calibration tool. And when film thickness is measured in your quality control lab, film thickness gauging is a critical tool in customer service and satisfaction.

SolveTech, the leading developers of film gauging systems offer customized tools for the measurement of thin film. Call us today to learn more about all our high-precision tools for gauging!